Why A Corner of India Called Pondicherry Remains France Till Date? 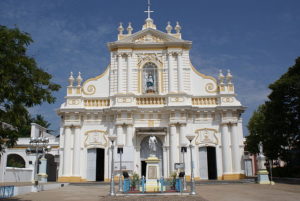 If you seek respite and enjoy being in calm and serene environs or if you crave to be out of the hustle and bustle of city life, Pondicherry is the place to be. It promises calm of the beaches and this French Indian city is truly mesmerizing. Yes! Pondicherry or Puducherry, a small Union territory bounded by southeastern state of Tamil Nadu has retained a very strong French imprint in spite of being an integral part of India. It was a French colonial settlement till 1954 before the French handed it over back to India.

Why Pondicherry is More France than India?

Stepping into Pondicherry will bewilder you. You would wonder whether you are in France or in India and sure to have a nostalgic experience if you are French. The magnetism of France still hovers through this Indian Union territory situated 160 kilometers from Chennai. The road signs are in French, the architecture is French, people speak French and most of the hotels serve wine and steak. The influence of France on Pondicherry’s ambiance is all the more apparent.

By the year 1850, the British secured their hold on India and the French were allowed to retreat in 4 small pockets from the South India. Pondicherry was one such pocket and the British had no problem allowing the French to be there. The Union Territory was fully liberated in the year 1963. Formal grid pattern of roads laid by the French is still there and referred to as the White Town.

Beauty of 32 Churches Here is seen In French Architecture:

There are as many as 32 churches in Pondicherry. Sacred Heart Church, Dupleix Church, Basilica of the Sacred Heart, Immaculate Conception Cathedral and Church of Our Lady Angels are some of the oldest and the biggest ones. The beauty of these churches lies in their French architecture.  Just a few moments of silence inside these churches can put you at complete ease.

One of the most interesting tourist attractions here is called The Lighthouse. It was constructed in the year 1836. This unique round tower based on French architecture is one of the most admired and sought after attractions in Pondicherry.

The influence of France is seen not only on the monuments but on the food served here as well. You will feel more of France here because streak and French Wine are served in the most of the restaurants here. Owing to several beaches here, seafood too is quite common.

It seems that the only thing that is Indian in Pondicherry is its new name given to it ‘Pudducherry’, though very few refer to it that way.  Let’s call it a Showcase of France in India.