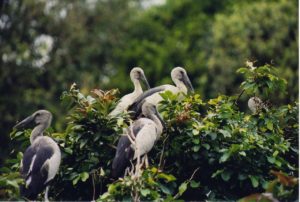 There is a nip of cold in the air in Sivagangai with dark clouds coming closer and the hasty wind bringing in a shower and moistening the terracotta red earth. Situated off the Madurai-Karaikudi highway in the village Kollukudipatti is the Vettangudi Bird Sanctuary and the loud echoes of sounds made by numerous birds.

Spread across 95 acres, Vettangudi is the oldest bird sanctuary in the state of Tamil Nadu, accommodating nothing less than 20 migrant varieties including common stork, ibis, grebes, egrets, herons and cormorants and also some rare birds like, the yellow wattle lapwing and lesser whistling duck.

Such a huge flock would not have thronged here if it were not the corrective steps taken by the residents of Kollukudipatti village.

The people of the village very thoughtfully decided to stop bursting fire crackers during the festival of Diwali as they saw very adverse effects on the birds in the sanctuary. It was seen that chick fell off their nests frightened by loud sounds, the birds got perturbed so henceforth at the Panchayat meeting it was put forth not to use any firecrackers by the then Panchayat President. Though the youth did rebel, but soon it became a habit which was self imposed and over a few years the firecrackers stopped for ever. Not only is there a restriction for Diwali but also for weddings, temple festivals and funerals. It is rather great to see that children too follow it very ardently.

Young children are happy of the fact that the birds have brought the village on the tourist map making even foreign tourists visit the sanctuary. They consider the birds as guests and take it upon their shoulders the responsibility for safeguarding the birds as well as their newly born chicks.

At the entrance to the sanctuary, the village folk take turns to stand and guide visitors who wish to visit the place narrating stories associated with the sanctuary. They take privilege in guiding people to the sanctuary as well as educating them not to disturb the birds that are in their natural habitat. Also in the absence of any forest guards and wardens, it is the people from Kollukudipatti village that make sure no one trespasses the sanctuary and enrages the privacy of the winged guests.

There are three very large tanks which are rain fed making it apt for the birds to fly into the sanctuary from September to February and is also the breeding season for the birds.

Birds often return here to spend the winters in the park every year, but due to irregular rains it is a little disappointing as the birds do not find adequate water and fly out to other locations instead.

The sanctuary faces a lot of commotion from monkeys who live in and around the village and when the water in the tank sinks, the monkeys climb up the tress and destroy the nests and eat up the eggs. The menace of monkeys needs to be resolved and the monkeys need to be rehabilitated.

Owing to the cooperation from the villagers, the contribution they offer towards conservation, the Forest Department every year on Diwali distributes sweets apart from fruit trees, tree gaurds and RO plants. Soon an eco-tourism project is also on its move and the village folk will be trained as naturalists thus encouraging local participation and also generating an alternate income for them.