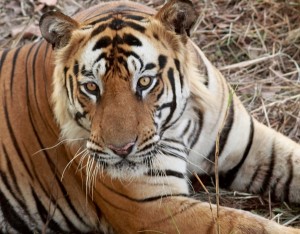 India holds over half the world’s tiger population. According to the latest tiger census report released on March 28, 2011 by the National Tiger Conservation Authority, the current tiger population estimated is 1,706 (i.e. ranging between a minimum of 1,571 to a maximum of 1,875). The results include figures from 17 Indian states with a tiger population.

Within the Shivalik-Gangetic plain landscape, it was reported that the tiger occupies 5080 km2 of forested habitats with an estimated population size of 297 (259 to 335) in six separate populations. In the Central Indian Landscape, tiger presence was then reported from 47,122 km2 (11.6 % of forests) with an estimated tiger population of 451 (347 to 564) distributed in 17 populations. The Eastern Ghat landscape complex had about 15,000 km2 of potential tiger habitat. Tigers occupied 7,772 km2 of forested habitats with an estimated population size of 53 (49 to 57). Tigers occupied 21,435 km2 of forests within the Western Ghat Landscape comprising 21% of the forested area. The current potential tiger habitat in the landscape complex is about 51,000 km2. The population estimate for this landscape was 366 (297-434) tigers. North-Eastern hills and Bhramaputra plains reported tiger occupancy in 4230 km2 of forests. Many of the tiger populations, particularly those outside protected reserves, are fragmented, suffer from intense poaching pressure, a dwindling prey base and over-used habitat.

The strategy for tiger conservation in India revolves around the National Tiger Conservation Authority and the Wildlife (Protection) Act, 1972. Between the mid 1970’s and mid-1980’s, many protected areas (66 national parks and 421 wildlife sanctuaries) were set aside, including large tracts of tiger habitat. They were later increased to 102 national parks, 515 wildlife sanctuaries and 44 conservation reserves and 4 community reserves. This resulted in an increase in tiger densities at many locations. Rampant poaching for the trade in tiger parts – all destined for markets outside India’s borders – now threatens the tiger’s very existence.

Prevailing conservation efforts are not geared towards, nor have they adequately addressed, the new threats with new protection strategies ie. better law enforcement, training and support. Excellent new tiger protection measures (such as the recommendations of the (Subramanian Committee for the Prevention of Illegal Trade in Wildlife, 1994 and Tiger Task Force, 2005) have been proposed but not implemented or little effective action has been taken in the field. Few of the tiger reserves have an established intelligence network and most of our tiger reserves do not have an armed strike force or basic infrastructure and equipment to combat poaching. The forest guards are often out-gunned and out-manned by poachers. Several cases of murder and serious assault on forest guards on duty have been reported recently.

The last meeting of the National Board of Wildlife was held on 18 March 2010. Large development projects, such as mining, thermal and hydroelectric dams, are also taking their toll on the tiger’s habitat. In the past ten years, thousands of square kilometres of forest land have been diverted and destroyed to facilitate such projects. Though mostly outside the protected network, the loss of this vital habitat will have serious repercussions on tiger conservation in India.

Since 1994, WPSI has made a concerted effort to gather accurate information on tiger poaching occurring throughout India. A total of 923 tigers are known to have been killed from 1994 to 2010. WPSIs extensive database of tigers poached has detailed information on poaching figures collected by us. These figures, however, are reported cases and represent only a fraction of the actual poaching activity in India.

An undercover investigation by the Wildlife Protection Society of India (WPSI) and the Environmental Investigation Agency (EIA) in 2005 revealed that the trade in tiger and leopard body parts in China continues to thrive, operating without any hindrance from the Chinese government whilst driving India’s wild tigers closer towards extinction.

Despite all these problems, India still holds the best chance for saving the tiger in the wild. Tigers occur in 17 States within the Republic of India, with 7 States reportedly having populations in excess of 100 tigers. There are still areas with relatively large tiger populations and extensive tracts of protected habitat. Adequate funding and international pressure will help. But probably the most effective way to implement tiger conservation action in India today is to enhance NGO participation. There are a number of dedicated organisations that are effectively involved in hands-on tiger conservation. They keep the issue energized on a national level and tenaciously try to increase political will to secure the tiger’s future. The Indian conservation and scientific community is now a proven force. It needs to be strengthened.