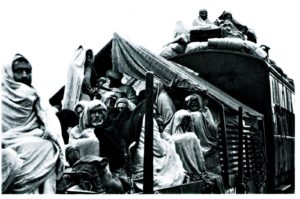 Legends are interesting and attract attention – Don’t they? On the concept of ‘Holocaust Museum: ‘the Hiroshima memorial’ or ‘9/11 museum: a site of conscience’, ‘Partition Museum in Amritsar’ is coming up, based on the horrifying and most touching events of the partition of India in 1947 that carved out East & West Pakistan out of India (East Pakistan later became a different country, ‘Bangladesh’). Walking through the two rooms of this museum will give you a sobering experience. Stories echoed through the rooms with interviews and audio clippings of the partition survivors would be the site to catch hold of when you enter the building.

An interesting clip of Kuldip Nayar talking about his interview with Cyril Radcliffe in London in the year 1971 is worth taking note of. During the interview Radcliffe admitted the fact that when he was sent to India by Lord Mountbatten he had absolutely no idea about India. He was provided with some outdated maps and had no idea about the country at all. Moreover, he was given just 5-weeks time to draw a line to divide the country. According to him, he would have done things differently if he had time in hand.

The museum will be a site worth visiting when fully operational later this year. Through this visit one would be able to learn the trauma inflicted on the people of India and Pakistan. It will be a museum as well as a memorial as it will preserve history for the future generations. Many of the protagonists that are featured in the museum are still alive. There is a clear difference between this sort of contemporary museum and the museums that were built in the earlier times. In the latter, there is no one to give the actual narratives. Apartheid Museum in South Africa is one of the contemporary museums which did not have too many artifacts but still narrates the story through the speeches, photographs and articles. Partition Museum in India is another on the same line.

This museum will educate the young generations about the history and the sacrifices made by the previous generations not only by the freedom fighters that were sent to the jail but by the common masses as well. The tribulations of thousands of migrants who had to walk thousands of miles along with their families to reach a country they had never seen before. This museum is basically people’s museum which is built around the narratives of the survivors. It is the 70th year of the Indo-Pak partition and when the last few survivors are in their 80s or 90s. The pain that they had undergone, the loss of dear ones that they had and the courage and resilience they had exhibited would be the major highlight.

The last gallery in the museum is the gallery of hope that has a message of peace and goodwill dedicated to the partition survivors.  The idea behind constructing this museum is a tribute to the survivors of the partition. The huge trauma of displacement that the migrants had to face overnight was overpowering and the articles kept in the museum will make that traumatic experience come alive. The museum is housed in the Town hall which is a few minutes away from the old-walled city of Amritsar.

The museum in its complete form will have 2 floors and 7 galleries. Walking over the heritage tiles across the arched verandas and through the Venetian glass doors, visitors will get an amazing glimpse of history. Visitors will get to see the things that would draw a live picture of what would have happened in the year of partition. The museum has started gathering the items like utensils, embroidery, clothes etc of that period. Narratives such as a bag stuffed with clothes, an account of wedding that took place in the refugee camp, haunting letters from the refugees who had their loved ones gone missing and many such touching episodes.

The museum evokes an enduring message of peace from both the sides of border through letters exchanged between families and friends parted from each other. The most unique feature of the museum is a tree of hope where visitors can leave their messages like “Wish God would not repeat this ever again with anyone”. Also, documentaries and films pertaining to the partition times like ‘Tamas’, ‘Garam Hawa’ and ‘Bhaag Milka Bhaag’ will be featured here in the museum. To provide an immersive experience songs and poems too written in the pre-partition era would be played in the museum to complete an experience.

The partition museum will open to visitors on Partition Remembrance Day on August 17 2017. Back in the 1947 this was supposed to be the day when millions of people were asking whether they were in India or Pakistan.

Come and have a mesmerizing experience of travelling through the museum with Indian Frontiers. The tour to the museum can be included in our itinerary Many colours of Indian Turbans. This programme includes Amritsar, though on a different theme but Indian Frontiers would be happy to include this too.