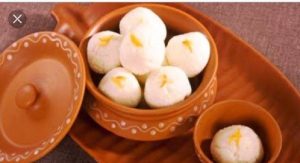 After arguments over the Kolkata’s famous and much famed Rosogolla simmered down soon there are arguments over the delicate and fragrant Biryani, and it would not be wrong to say that what Kolkata relishes today it might soon be recognized nationwide.

Agreed that Mumbai is the financial capital of India but truly Kolkata is its stomach. The street food of Kolkata is truly innovative so much so that in the crises of Covid-19 they made sandesh in a spiky shape like the Covid virus and so much so when the film Titanic won the Oscar awards markets were flooded with boat shaped sandesh.

Many experts argue upon whether or not to call a sweetened fig-ball Biryani a rosogolla Biryani or not? But today with the restrictions and lockdowns require more of visual appeasement through the social media. Morels or guchhi a very rare truffles which grow in Himachal Pradesh was seen been included in menu of celebrities so much so that its demand was accelerated and as a result artificially enhanced varieties of morels were imported from Europe

The Biryani from Bengal may have taken clues from the Biryani made in the kitchens of Oudh and may have travelled and brought to the region of Bengal with the exiled last Nawab of Oudh, Wajid Ali Shah, or it may have been an economic concession to add potatoes and less of meat and also with the nawab and his entourage introduced the custom of offering paan along with exotic herbs and crushed pearls?

The most significant introduction to Kolkata’s culinary exchange is the overwhelming influence of Chinese food. Nearly after two centuries of first Chinese traders who came to Kolkata the legacy of Chinese food is still in continuation. Noodles or Chow can be seen rightly from street food vendors to fancy hotels but of course with a more Indianised taste.

Though authentic Chinese dinner menu has lots of variety of soups, served with some wonton wraps and other stir-fried, or steamed delicacies and lastly ending with a bowl of rice. In Chinese food nothing is wasted, if they are cooking duck then all parts of the bird will be utilized. In Kolkata the Chinese version of Chinese food is mostly vegetarian mostly consisting of mushrooms, broccoli, cabbage, baby corn deep fried and laced with hot, sour and sweet sauces often enhanced flavours by addition of ajinomoto.

It is an inspiration from David Attenborough’s documentary A Life on Our Planet wherein a life-long search for nature in its pristine state at places hard to reach, it is even a bit satirical that the first foreigners to came and settled on the banks of the Hooghly river were his forefathers.

An 18th Century British diary writer and analyst, William Hickey relates to what is meant by king of table in Calcutta’s bygone era. The accounts of hearty meals along with trifle puddings have still managed to survive in the planter’s club in the hill stations.

Also some of the finest oil paintings depict the era which was an amalgam of feudal land lordship and the colonial endeavour clubbed with luxurious life style which made one believe that consumption of food by the elite gave more pleasure to the person who produced it.

In the year 1943 when Bengal was struck by a great famine leading to demise of over three million people because the British had given orders to feed their army leading to a man-made disaster. Freda Bedi who is a Gandhian revolutionary very rightly puts in that it was not a problem of rice and its availability it was a problem of fragments in the society.

The conclusion which Attenborough comes to at the end of his documentary that mostly people are living in fragments and it will take a surmountable time for the earth to heal and will not be reversed until it is a combined effort. But in the midst of the pandemic there are actions of ourselves healing ourselves and make best of what is available to us, it will be better to go in for the rosogolla Biryani than hunt for truffles which are not readily available to satiate our taste buds.