Mumbai: a beloved home of Iranians 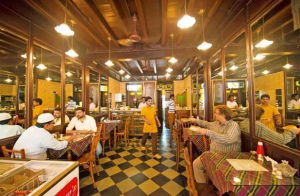 Speaking a type of Mumbai language that can be seen mainly in Bollywood movies, “Mai paila seth hai jo apna girak ko bola hai ki maal kam leke jaao” (I am the only business man who tells his customers to buy less), Hassan Hajati explains why sometimes he convinces his customers to buy a tad less quantity so that it doesn’t go out of stock and more people can savour this delectable dessert.

Hassan’s Iranian Sweets Palace is a place where he sells a sweet made out of a 110-year-old recipe. And it opens only during the month of March to meet the Nouroz demands of the Parsis, Muslim Iranis and Zoroastrian Iranis in the city. Hassan is a thir-generation of the Irani Muslims.

The shop is located at a walking distance from the Old Persian style blue mosque – the Mughal Masjid, which was built 159 years ago in the Bhendi Bazaar. The Bhendi Bazaar is another symbol of lasting Iranians’ presence in Mumbai.

It was Hassan’s grandfather, Haji Ghulam Ali, who travelled to Indian in the year 1990 from the drought hit Central Iranian province of Yazd – in search of greener pasture just like many others.

Unlike other of his compatriots, Ali arrived here with enough money to set up his own tea house and sweets business. That time, there were some more Iranian-owned shops in the area selling baklavas but those wound up over the years.

This is a tradition, Hajati has kept going and his son is also interested in taking it forward. Although Hajati is reluctant to modern ovens or aluminium trays, he has a swanky website and encourages his customers to leave reviews and order in bulk on WhatsApp.

Moreover, Hassan supplies over a dozen varieties of Iranian nuts throughout the year. After the rial was weakened by the United States’ due to withdrawal from nuclear agreement with Iran and growth in reliance exports, the price of those Iranian nuts has rose.

He hopes the strict sanctions that were reinforced on the country during last year will soon come to an end. Hassan visits Iran annually right after Nauroz, to experience spring. And every time when he is in Iran, he always comes across such questions from someone there: “Agha, khun-e Amitabh Bacchan rafti? Salman Khan ra mi bini? (Agha, have been to Amitabh Bacchan’s house? Do you see Salman Khan?)

Some accounts reveal that migrations of Iranis started as early as mid-1700s. As Sunil Kavadi writes in his book Nakyavarch IRani (Irani around the corner) that the Zoroastrians form Yazd acquired from Parsis the fact that Mumbai was a land of promise and was soon followed by Irani Muslims.

There was an array of factors which kept bringing the Irani Muslims to India, including dry spells and famine, slumping economy under the Qajar rule and even an urge to escape the conscription of two years.

In most of the cases, families sent at least one son to India to earn who either set up work or got work at small restaurants.

With the rise of mills in Mumbai, a ready base sprung up fir thousands of hungry textile workers. Even Hyderabad and Pune have Irani pockets.

A misnomer based on a marker used to identify the Muslims among Iranis as “Mughal IRanis” in British-era documentation.

It was the British style of adding milk to tea which was adopted here, albeit in Iran black tea was prevalent.

Under the influence of Iran’s kahvekhane, these teahouses gradually became a hub of intellectuals and artists.

Many Iranians went back, when Mohammad Reza Shah visited India and called on the Iranians to return. Therefore, there are now likely 40 Iranian establishments left from among roughly 700 establishments which were there at that time. Sayed safari Ali, the owner of Lucky restraurant located in Bandra & the oldest Iranian still in the city’s food venture fabric, reckons that now some hundred families are remaining in the city.

There are many Mumbai Iranians who married women from Iran and have strong family as well as business ties in both the countries. They learnt Persian in schools and pick up bits of several Indian languages like their fellow Mumbaikars.

While some of them are simultaneously maintaining the tradition of selling Irani merchandise, others have opted for other professions.

Reza Kabul, who began his own architecture firm in the year 1988 out of mezzanine in Vorli venue of father’s Irani establishment’s empire, says – “India is his home and Iran is the motherland.”

Festivals, cultural events and tea still bind Iran together. Most who go out to explain the “haft-seen” – the seven times starting with the Persian letter ‘s’ which are arranged in a Nauroz table.

While most of them visit Iran for once every few years, for older Iranians like Lucky Resturant’s owner Safar Ali visits to the motherland have reduced. The 90 year old says “I have been tp Iran 5 times. Now I am contented here”. Adding in a poetic fashion, he says, “Wherever you go, the sky is of the same colour.”