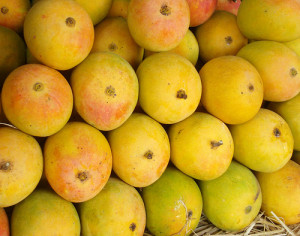 It’s hard to write about mangoes because there’s so much to be said of them. Famously called the “king of all fruits” by J.W. Purseglove, native mango eaters who smugly repeat the quote then cannot agree on the best variety. It is a contentious subject even among people brought up on the same food, members of the same family. So it’s not just about Alphonso versus Langda versus Chaunsa; my mother swore by Rataul — now almost impossible to find — and my father by Dussehri. (And my children, poor ignorant Philistines, can’t tell one from another.) Varieties, like Kesar and Hamam, unknown in Delhi until a couple of years ago, are now on each roadside pushcart. And provenance changes: suddenly Safeda isn’t from Benares any more; it’s from Andhra. As soon as the vendor knows the difference, it might be Telangana, not Andhra. That apart, mangoes, like all fruit that grows in abundance anywhere, is eaten fresh as much as possible and what cannot be consumed fresh is then fashioned into desserts, drinks, curries and all manner of preserves: pickles, chutneys, toffee, canned or packaged pulp and juice.

The mango has been cultivated for 4000 years or more in India and in Vedic literature it was spoken of as a transformation of Prajapati, the Lord of Creatures, who later became the Lord of Procreation. The legend goes that Surya Bai, daughter of the sun, was persecuted by an evil sorceress and to escape she became a golden lotus. The King of the land fell in love with this lotus and the sorceress burnt it to ashes. And from the ashes sprang a mango tree with such beautiful flowers and fruit that the King fell in love with them too. Then when the ripe fruit fell to the ground, Surya Bai stepped out from it and was recognised by the King as his long-lost wife. So mangoes are not only the tale of the triumph of true love and monogamy, of transformation of one beautiful thing to another; but to my food-oriented thinking, a metaphor for the transformation of mangoes from fresh fruit to pickle and to dessert.

In the first century AD, the Chinese traveller Hwen T’sang visited India and the mango must have enraptured him too because the next thing we know, mangoes moved east. By the 10 century AD, Mangifera indica had spread as far west as Persia. From the 16 century the Portuguese took it to Africa, Brazil, the West Indies, Florida and Mexico. In India, meanwhile, the mango had become a status symbol; the cultivation of mango orchards was the prerogative of rajas and nawabs. Emperor Akbar planted one lakh mangoes in Darbhanga in Bihar in an orchard called Lakh Bagh. In the Ain-i-Akbari, Abul Fazl wrote of the mango “…This fruit is unrivalled in colour, smell and taste; and some of the gourmands in Turan and Iran place it above muskmelon and grapes…” It was probably intended as the highest praise!

» 5 kg raw mango, Ram Kela
» 500g salt
» 50g kalonji (nigella sativa seed / black caraway)
» 250g methi dana (fenugreek seeds)
» 250g saunf (aniseed)
» 2 tbsp haldi (turmeric)
» 4-5 tbsp red chilli powder
» 1 litre (or more) mustard oil
» Wash, wipe and cut mangoes into convenient size.
» Mix spices with 1-2 cups oil. Combine with cut mangoes in a large steel pan, mixing well to coat all over. Transfer to a glass/earthen martban.
» Top up with oil, making sure that no mango is left uncovered.
» It is unnecessary to salt and leach the mangoes.
» The acid content and the oil barrier prevent spoiling.
» After mixing mango pieces with spices, keep aside for a few hours so that they shrink and settle lower in the pan. Less oil will be needed to cover the pickle.