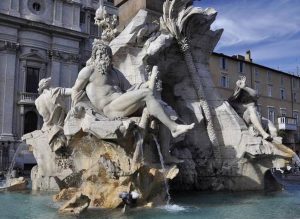 The history of Naples goes back to three millennia with reminisces of Hellenic pottery left behind by its Greek founders who named the city ‘Neapolis’- meaning to say new city in Greek. Greeks had an influence on the local population  by way of  speaking Greek and contributions to Italian culture and so much inventing ‘makaria’ which is said to be the origin of macaroni with its unmatched historical continuity.

Naples archaeological museum has best of Europe’s collections not only Pompeiian relics but also Greek and Egyptian artefacts and antiques. In the gemstone hall one can find carnelians, which are a semi precious quartz stone but a product of India since the Harappan times and still mined in Rajpipla a city in the state of Gujarat. There are mosaic portraits of once living folks of Pompeii who supposedly perished with the eruption of volcanoes of Mount Vesuvius in 79 CE. Also at the rear of the gallery once closed steel gates which barred the entry to the Gabinetto Segreto, “secret cabinet” have been re opened.

A room which had been shut since 1819 is now accessible since the year 2000 and has impudent artworks such as, frescos of brothels showing fair skinned erotic and exotic women with styled hair naked in a variety of sexual positions with young, tanned athletic men. In the Victorian era these frescos were hidden to prevent perversion towards women and children in the society. To the surprise of all there is also an ivory figurine of ‘Lakshmi’ – thought of as representing an Indian goddess of feminine beauty and fertility dating back to 1st century CE. The statuette is an exemplary piece of Indian craftsmanship with a scanty costume, curvaceous body but yet adorned with splendid jewelry along with dwarf attendants holding cosmetic items

Although many Italian scholars argue the statuette was a broken-off mirror handle or a toiletry article, “probabilmente per un oggetto da toletta”, modern researchers feel it would make for a very impractical handle, and have found indications — such as small drill holes that may have served to fix it to another object — that it was possibly one leg of a low three-legged table.

The museum establishes that there were commercial relationships that existed from 1st century AD between the countries of west Mediterranean and the east through the port of Puteoli constructed during Augustan Era (27BCE-14CE) to facilitate trade. The port also had a separate warehouse for the traded Indian spices.

The love for ivory goods like balm case with cupid, head of a gladiator, fancy combs and many such give an ostentatious of Indian ivory workmanship finding its way in Naples. During the last years of the British Raj in India, Mortimer Wheeler, Director General of Archaeology observed in ‘Rome Beyond The Imperial Frontiers’ (1954) that relics of Indian trade in the west are few for the good reason that most of them were of an impermanent kind, but also appraised that the figurine of Lakshmi is indeed a fine example of Indian craftsmanship which may have found its way through Barygaza present day in Bharuch in the state of Gujarat.

Though strange that both Naples museum and wheeler argue that the figurine is of Lakshmi, but in 1940, archaeologist J.Ph. Vogel had casted his doubt claiming that the figurine is of a Yakshi. Yakshi is female earth spirit which is considered as a symbol of fertility by the Hindu, Jain and the Buddhist faith and is portrayed as wide-hipped voluptuous women with narrow waists, broad shoulders who caused a tree to bear fruit by simply touching it with her foot.

The great South Indian Dynasty emperors were patrons of arts and had been trading with the Romans. In the Satavahana region in the Deccan, many Roman artifacts such as a bronze statuette of Poseidon or sea god was found along with fragments of a Pompeiian-style wine drinking set; at Ter — known to Mediterranean merchants as Tagara — an ivory statuette resembling the one from Pompeii was discovered in the city of Kohlapur in the State of Maharashtra

Ivory pieces both finished as well as unfinished have been deciphered in the village of Bhokardan in the state of Maharashtra along with the discovery of the lower half of a statuette in Kolhapur nearly identical to the one at Pompeii, which could in fact have been carved by the same artist. All these evidences fully affirm of the past workmanship of Indian craftsmen found its patronages in Pompeii

Yet another Roman fascination with India is the Grand Fontana dei Quattro Fiumi  also known as Fiumi Fountain(Fountain of Four Rivers) created in 1648-51 by Gian Lorenzo Bernini, a very prominent sculptor of his age features the river Ganges the most holy and revered river of India.

Also in the museum lies ‘Dioniso e gli Indiani’ — Dionysus with Indians which dates back to 4th Century and refers to a legend about Dionysus, who according to Greek religion and myth is the God of the grape-harvest, winemaking and wine, of fertility.  Dionysus is believed to be once the king of India responsible for bringing religion to the West!

As one gets off the Pompeii Scavi station one can see a huge, open air area well organized Greek–styled streets probably the one that can be compared with Hampi in southern India which is also one of the biggest open-air museums. Under the Pompeii’s municipal and commercial hub are stalls under colonnades where goods from around the world and from India as well were sold. In those pretty old days the Malabar Coast of India which is the spice hub of India, trades were established and the black pepper was sold for 1 gm of silver!! Evidences even show, sale of Spanish olive oil infused with Indian spices and ivory artifacts.

The ‘street of abundance’, holding a cornucopia — presumably indicating the wealth of goods for sale,  which served as main thoroughfare from the forum to the palaestra, or sports complex with its grand arena seating well over 10,000 spectators. More or less the entire population could watch gladiators butcher innocent wildlife here.

One can see the bath houses with their indoor waterfalls and sexual frescoes and an attached brothel, with Oriental slave girls. Here, too, pepper was used as a predecessor to Viagra, mixed with honey and rubbed onto the man’s sexual organs, which is self- explanatory why pepper from Malabar was so important to Romans.

As one passes through the homes with painted walls and mosaic flooring, one can gauge that there were holiday homes of Romans in and around of Pompeii. In one such ornate house, fresco of a Greek playwright Meander, whose comedies were performed at the town’s 5,000-seating theatre. It is believed that he invited actors to his home for lavish banquettes, as his house reveal two silver pots with Malabar Pepper, perhaps to be given as gifts to his guests.

Small shops, very much like the small grocery shops in India, dealing in textiles and dyeing — wealthy Pompeiians dressed eloquently in Chinese silks, Egyptian linen and Indian cottons, rather than cheap Italian sheep’s wool. Indigo dye, a costly product from India, perhaps the indigo was imported by the merchant who owned the Indian house. A few streets away is the ‘house of the Europa ship’ due to the graffiti drawing of a cargo ship.

A rectangular in shape, possibly Indian house sprawls over much of its block, some 40 meters from street-front to back wall, way bigger than a modern day accommodation in metro cities in India. Built in the mid-50s CE, it is a fairly typical example of how a reasonably prosperous family enjoyed Pompeiian living. The tiny back garden, viridarium, has a flowering tree and is enclosed by a colonnaded courtyard, peristylum, where the inhabitants would dine

Archaeologists dug up a wooden chest containing the ivory statuette, along with 39 glass items, many bronze utensils and one glazed ceramic vase from Alexandria.

One of the corner shops out front was an Indian-style spice emporium. Instead of wine by the amphora, maybe they sold arrack? Arrack that originated in Kerala is, as research shows, one of the world’s oldest hard drinks.

But who lived in these houses in the shopping street of Pompeii is a misnomer? Though, epigraphists have been able to decipher a scribbled list of names from a wall:  Daphnus, Felix, Agele and Attice. The last name has a distinctly Greek ring to it, pointing at a person with Athenian manners and a certain refined elegance.

The sketch known as Cena Trimalchionis (Trimalchio’s Dinner) is set about the same time, in 60s CE, in Pompeii’s vicinity. The evocative text fills in the gaps of imagination: the host flaunts his wealth as he tries to impress guests with cooked storks, honey-dipped dormice, eggs stuffed with live birds, bees from Athens to make Greek honey, and even ‘mushroom-spawn’ from India. Likewise, might this homeowner have pulled out his beautiful oriental Aphrodite and told wild stories about how he got it during his adventures in Asia?

One will be amazed to see the sketch Trimalchio’s Dinner in the close proximity of Pompeii. Gaius Pompeius Trimalchio Maecenatianus previously a slave, but managed to earn a lot of wealth by his shipping businesses. Tamalchio is seen as a huge fat, bald man wearing scarlet robes, eye catching jewellery. Tamalchio’s wife Fortunata was a lap dancer who had later become a respectable lady and a keen hostess. The sketch narrates how a wealthy host displays ostentatiously his money by holding a big banquette and serving some delicacies like birds sewn inside a hog, live birds in fake eggs and mushroom spawn from India.

It is now for us to conclude that it might be this pompous house owner who might have boasted to his guests about his adventures in Asia and by showing off this figurine of his oriental Aphrodite?