Importance of Rice in Biryani & Pullao 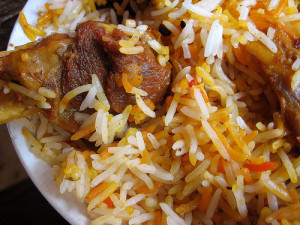 In Delhi’s 14th century Feroz Shah Kotla fortress which is a reminiscence of the Tuglaq era, also known for the famous cricket stadium nearby, comes alive on Thursdays when faithful assemble to offer incense and lamps to the djinns believed to dwell here in the narrow and dark alleys of the fort in hope to fulfill their wishes. Those who are granted their wish return to distribute biryani as thanksgiving. Soon the rice dish gets devoured and so does the controversies of being in India, where rich and poor, love and hate all coexist. Well the aromatic biryani brings all people together and with a sense of belongingness, betraying the ever occurring dispute that the humble biryani is not Indian and that it originated from Iran.

The ‘beryan’ from Iran and especially from the central province of Isfahan is poles apart from the biryani we know of. The Beryan in Esfahani is a sandwich of sautéed minced lamb between flat bread called sangak along with a drizzle of crushed nuts and a dash of lemon juice. The only similarity is that the beryan and the biryani both are layered, the biryan like a sandwich and the biryani where meat is layered between aromatic rice. Interestingly, the Nuskha- e-Shahjahani, a 17th century manuscript of recipes dating back to the Mughal Emperor Shahjahan’s kitchen mentions ‘beryan’. However, it is difficult to say whether the style of layering meat with rice is an Iranian tradition or an Indian innovation. Though the dish has been around for over 400 years and every region of India has a different regional incarnation of the biryani.

The tussle between the Briyani and the Pulao

Well the difference between biryani and pulao has always been a matter of dispute and debate. The ‘Yakhani Pulao’, to call by its correct name is a dish that travelled from Central Asia to India. Yakhani pulao is rice cooked in meat stock which is called yakhni. It is a common dish found very commonly among various communities of India. Like the Kyasths, who are a literate and educated class of Kshatriyas (warrior class of social order in Hindu caste system) follow the recipe for biryani by preparing a stock of sautéed meat along with ginger, whole spices like cardamom, cloves, cinnamon and later layer with rice and cooked in a sealed pot over a slow fire, the process of which is called ‘dum’ – where the dish is allowed to cook in its own juices to retain its flavours and nutritional contents. Also on the lid of the vessel are placed a few pieces of live charcoal to create a convention oven. This process of cooking biryans is same in India with a few regional differences. Some of course are commercial inventions like ‘tawa biryani’ which somewhat appears like a fried rice where the meat gravy is tossed with rice on a tawa (iron skillet).

The biryani is a shorter process where the process of preparing a meat stock or yakhani is omitted in contrast to that of pulao, where spices are tied in a muslin cloth called ‘potli’ and placed in the pot while preparing the stock. All across India in various communities like Bunts, Parsis and Kashmiris, pulao is prepared. Unfortunately the process of making the stock is diminishing hence making the real pulao rare and even pulao now bears a close resemblance to a biryani.

In the cuisines of Lucknow and Delhi, many newer innovations were there, where a number of lentils and vegetables are added to the pulao and even to an extent, vegetarian pulaos too were made. One such vegetarian version of pulao is Tehri mainly prepared in the state of Uttar Pradesh. The Tehri consists of seasonal vegetables sautéed in spices and layered with rice.

Thus the major difference in pulao and biryani is that the pulao is made by preparing a stock and then placing the rice over it, whereas, in a biryani no stock is prepared and the meat along with rice are simply finished off on a slow fire using a dum process.

Biryani usually has saffron to beautify the rice grains but a pulao may or may not have saffron and is usually flavoured by cardamoms, cloves, cinnamon and other aromatic spices

Some variations of same dish in different regions of India

Debates have no end whether Mppila biryani is better than Ambur biryani? Or is Lucknow biryani better than the biryani of Calcutta and Hyderabad? In a diverse country like India which has a large variety of cuisines with a great variety of spices and techniques of cooking, preference of biryani is totally a matter of personal choice and appreciation.

Many a times one overlooks the importance of rice used for making biryani. Lucknow’s biryani is regarded for its subtleness which not only comes from the saffron and kewra (screw-pine water) used in it but primarily due to the good quality of long grain basmati rice. Though nowadays basmati is a generic word used for most of the long grained rice which today can be seen in the markets, earlier a special basmati was cultivated for Lucknow’s silver-spoon gentry.

Often amateur cooks might use thick Sela rice for making biryani owing to the fact that that the basmati rice needs more precision while cooking and also can turn up in a big lumpy mass if the amount of water is disturbed. Contrary to this, the sela rice which is not dry milled to take off the husk but is boiled to remove the husk is easier to cook and does not clump together as required for a perfect biryani (at least visually) each grain needs to be separate.

When the ‘Ambur biryani’ from the southern state of Tamil Nadu, which is a descendant of the courtly Arcot biryani was introduced for the common man by one of the Nawab’s cook who replaced the basmati rice with a local variety of rice called ‘seeraga samba’, a small grained flavourful variety and which initially became a favourite among the truck drivers.

In Kerala, the spicy ‘Thalassery biryani’ is an adaptation of the Arcot biryani and for this Kaima rice is used, similarly in Calcutta biryani, sela rice is preferred. Today, more biryanis with distinct local flavours and variation in ingredients are becoming common leading to new creations. More and more biryanis are evolving.