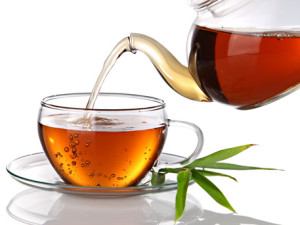 The entire procedure of making any exotic tea is firstly to bring water to a boil and then pour it over tea leaves placed in a teapot, leaving it to sit for some two minutes and finally pouring it in cups. The reduction of temperature from the kettle to the pot and from the pot to the cups brings the right flavours of the tea and so is it with Oolong.
Oolong is one of the six specialty teas grown at Donyi Polo Tea Estate in the north-eastern state of Arunachal Pradesh. The Golden Needle tea as per the news reports fetched Rupees forty thousand for a kilo! Thus Golden Needle tea is the most expensive tea ever to be sold in any auction in India.

Donyi Polo Tea Estate located in a small village of Oyan in East Siang district is cultivating tea since 1980’s, but more recently gained fame after its Golden Needle tea sold for a very high price and later their Purple tea sold for Rupees twenty four thousand five hundred and one per kilo at the Guwahati Tea Auction Centre (GTAC) in Assam.
These specialty teas, Yellow, White, Silver Needles, Golden Needles, and Purple need utmost care and do not grow throughout the year and need the apt climatic conditions, the Golden Needles for that matter need a dry sunny weather, since Donyi Polo is situated in the foothills and does not have a consistent weather conditions making it quite challenging for production of these specialty teas.

The Golden-tipped tea is grown extensively in many parts of India but the Donyi Polo Estate is the sole cultivator of the very distinguishing needle-shaped, golden tea buds. Though the difference between the Golden-tipped tea and the Needle-shaped golden tea is very minor, yet it is very significant. In other tea estates the buds consists a Golden tip but in the Donyi Polo the entire bud is golden.

The Golden Needle tea, outside China is just grown at the Donyi Polo tea estate. The recent revolution in the tea plantation is encouraging new farmers and tea-plantation owners towards growing specialty tea.

Compared to Assam tea which is well famed, Arunachal Pradesh is quite recent and not many are aware of its new cultivation and its exclusivity regarding the exotic tea grown in its estates. It is true that in some recent years local markets have been boomed with home-grown tea. The advantage of Arunchal Pradesh is that its climate is apt for tea cultivation as well as the number of Himalayan rivers and rivulets which flow helping in the irrigation of tea estates.
There are quite a few Arunachal Pradesh teas which promote themselves as organic and so is the case with the Donyi Polo tea estate. Efforts are being made to convert the entire estate into organic farm.

Though there is a belief that the Purple Tea originated in Northeast India but was not very widely cultivated. It was even grown in some parts of Kenya and it is said that perhaps the British took saplings from India to Africa and later due to lack of importance, this tea couldn’t flourish well.

Rediscovered after being forgotten

It happened in the year 2014 when in the Donyi Polo tea estate some leaves which were deemed wild, turned out to be that of Purple Tea. Sooner a couple of hundred plants were cultivated and around six kilos of tea was thus produced for the first time.

The tea was tested for anthocyanin-rich antioxidant and later auctioned. The tea made from these leaves has a very distinctive purple coloured, giving it a bit of a royal look and the tea is said to be good for detoxifying the body as well as helping the body in fighting cancer, improving heart condition and good for overall health.

There are plans to accelerate the production of Purple tea but there are many constraints to bring the right flavour to the tea. It is a labour intensive tea plant. Though the cost of the tea is steep but as compared to the labour, it still is far less. Very select leaves are plucked for making specialty teas and the time needed to do so, is much more than the ordinary tea leaves. The Golden Needle leaves plucking takes eight hours just to pluck hundred grams of leaves.

Around fifteen kilos of Purple Tea can be plucked at one time as compared to twenty kilos of non-specialty teas like the Assam CTC in a period of eight hours. The Golden Needle on the other hand, requires some special procedures – the buds, after have been plucked need to be hand rolled to give them a needle-like look. All this and many other things, increase the overall cost of the tea.

Undoubtedly, Donyi Polo has gained fame but for most Indians who crave for their morning cup of tea, still prefer the strong Assam CTC tea with milk which cannot be compromised as the tea makes them going through the day.