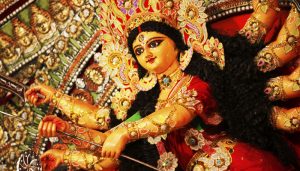 In India, festivals are as diverse as the people and that is why every now and then you will find people of India prepping up for a festive celebration. Every festival in India brings along vibrant vibes. One such auspicious occasion in India is – Durga Puja, worshipping of Goddess Durga. This is one of the warmest and lively festivals of India. Also known as Durgautsava, the festival lasts for 9 days before the Dussehra.

Although the festival is marked across the country, the city of joy – Kolkata, observes it in the most divine and grand manner. The festival smears the whole city in the festive mood. This festival is endemic to Kolkata as it is the city of Bengalis and for Bengalis, the Goddess Durga holds a special reverence.

The Durga Puja festival in Kolkata is a divine experience and no matter to which religion or culture you belong to – you’ll be totally engrossed in its aura.

To experience Kolkata Durga Puja, ideally you should be in town at least a week before the festivity starts. So you can take a tour of the city and see how the festivities begin. If that’s not feasible, there are still a lot of other ways to appreciate it— all night long!

Here are some of the best experiences you can indulge in during the Durga Puja days in Kolkata.

In Kolkata, the idols of Goddess Durga are handcrafted with much love and devotion and the end result is so amazing that even a slight glance at these idols can mesmerize you. And if you see the effort that goes into creating them, you’ll enjoy them even more. In Kolkata, it’s not difficult to do that because there’s a whole area dedicated this craft of idol making — Kumartulli – located in the north of Kolkata, about 30 minutes drive from the town center. The name literally implies “potter’s place” and, as it is suggested, the region was settled by a group of potters. There are now around 150 potter families living there. If you go there on the occasion of Mahalaya (about a week before Durga Puja begins) you will be able to see the eyes drawn on the statues in the auspicious ritual called Chokkhu Daan.

The invocation of the divine presence of Goddess Durga into the idols marks the commencement of the Dugra Puja. The rituals begin in the early morning, before dawn. It starts with the bathing of a banana tree in the Hooghly River. The banana tree is dressed like a newlywed bride (known as “Kola Bou”, the banana bride) in a sari, and is used to transport the goddess’s energy. Bagh Bazar, Prinsep and Ahiritola ghats are the best places to attend the ritual.

While Kolkata’s government Durga pujas tend to get all the attention, the traditional Bonedi Bari pujas in the city’s palatial ancient private houses are also worth a visit. The houses belong to wealthy aristocratic zamindar (landowner) families who have been carrying pujas for centuries. They spread throughout Kolkata (as well as other significant cities in Bengal). Two of the most famous are Sovabazar Raj Bari and Rani Rashmoni Bari in northern Kolkata.

Witness worship in many forms

The Kumari Puja is another significant ritual that’s performed during the Durga Puja festival. During the festival, Goddess Durga is worshiped in various forms. In this ritual, she’s worshiped the form of an innocent young unmarried virgin girl. This serves as a reminder that the goddess and her energy are omnipresent in all beings.

The highlight of Durga Puja is no doubt visiting the many different displays (pandals) of Goddess Durga, each with a unique theme or decorative style. This activity is commonly referred to as “pandal hopping”. There are thousands of pandals in Kolkata so it’s only possible to visit a fraction of them — and even then it requires a bit of strategic planning as they’re spread out all over the city. You’ll find the most well known ones in north and south Kolkata, which is conveniently connected by the Metro railway. The most popular time for pandal hopping is in the night when they’re lit up. If you go during the day, you can avoid much of the crowd.

Immerse yourself in the divine dance

After the evening rituals on Ashtami, it is traditional for the devotional Dhunuchi folk dance to be performed in front of the goddess Durga to please her. This is done by holding an earthen pot filled with burning coconut husk and camphor. Drummers lead the dancers with beats that vary in speed. Smoke, sound and rhythm engulf the atmosphere. It is intense and intoxicating! Men and Women both participated in the traditional dance. This dance has become so popular that people have begun to organize competitions.

Gobble on everything delicious

It’s never better time to sample Kolkata’s renowned Bengali cuisine than Durga Puja. The festival is not regarded to be complete without meat! You’ll discover a broad range of them all over the place — in the streets, in the pandals, and in specialty Bengali restaurants.  Pandal hopping is going to get tired, so eating while you’re out and about is a must. The food given to the tourists of the pandals is called bhog (offerings to the god that are distributed). It is frequently made up of mixed vegetable curry, a sweet dish, a fried product and chutney. Kolkata’s Bengali restaurants have exclusive Durga Puja menus packed with genuine delicacies— both buffet and a la carte. Bengal sweets are also eaten with much craze and fervour.

On Dashami, the last day of Durga Puja, the festivity begins with married women putting red sindoor (powder) on the idols of Goddess Durga. They then smear it on each other. In the evening, the idols are immersed in the water. One of the most popular immersion points is Babu Ghat (centrally located near Eden Garden), although you’ll be able to catch the action at any of the ghats along the river. You can either head to Red Road and watch the Durga idols being taken in procession to the ghats as devotees chant, “Aasche bochor abar hobe!”(It’ll happen again next year!).