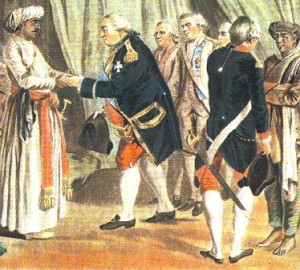 It has been said that the British Empire was picked up in a “fit of absence of mind.”  Nowhere was this more true than in the case of India which gradually came under British rule, not by the efforts of Britain’s government, but by those of the British East Indies Company, founded in 1599 by a group of merchants in search of nothing more than “quiet trade.”  However, circumstances would thwart these peaceful intentions, and over the next 250 years the British would find themselves more and more in the role of conquerors and governors than traders.  Not only would the British have a profound effect on India’s history, but the “crown jewel of the British Empire” would also affect Western Civilization.  This is reflected in such English words as bungalow, verandah, punch, dungarees, and pajamas, such customs as smoking cigars, playing polo, and taking showers, as well as more profound influences in the realms of religion and philosophy.

Two main lines of development worked to bring the British East Indies Company to India and make it a power there.  For one thing, by 1600, Portugal was losing control of the East Asian Spice trade.  Therefore, in 1601, the British East Indies Company started sending ships to the Spice Islands to gain a share of this trade. At this point, there was no intention of even going to India, let alone of conquering it, since the Mughal Dynasty had a firm grip on the subcontinent.  However, the Dutch also had designs on the spice trade and rebuffed any British efforts to take part in it.  As a result, the British East Indies Company gained the right to set up trading posts along the coast of India.  Later, some of these trading posts would grow into major cities such as Madras, Bombay, and Calcutta.

The other factor pushing the British East Indies Company toward conquest had to do with the Mughal Empire.  This dynasty had ruled most of India peacefully and tolerantly for a century since the 1500’s.  However, during the reign of Aurangzeb (1658-1707) all that changed as he started persecuting Hindus.  Not only did this trigger centuries of religious strife that still continues, it also began the decline of the Mughal Empire, which suffered from weak and corrupt government from this time on.  The resulting turmoil forced the British East Indies Company to defend its trading posts against local princes, brigands, and a new European intruder, France.

The French, to compensate for the lack of European manpower so far from home, initiated the strategy of training and arming native recruits ( sepoys) like European armies.  Such forces were so effective that local princes would trade large tracts of land for French trained sepoys, thus giving the French control over much of Southern India.  In response to this new threat, the British responded in kind by training their own sepoys.  By the end of the Seven Years War (1756-63), British naval superiority and sepoys under the leadership of Robert Clive had virtually ended French involvement in India.  Clive dramatically demonstrated the effectiveness of European trained sepoys at the battle of Plassey (1757) when his army of 2800 British soldiers and sepoys routed a Bengali army of 100,000 men.  Clive’s victories over the Bengalis and French made the British East Indies Company a major power in India, able to install its own candidate on the Mughal throne and claim the wealthy province of Bengal for itself.  British dominance resulting from these victories had three main effects.

First, British power, plus the fact that their “honorable masters” in England were 7000 miles and nine months travel away, left India wide open to exploitation by the company and its employees.  Many British took full advantage of the opportunity to “shake the pagoda tree”, as they called the collection of “gifts” from grateful local princes ( nawabs).  While a noble in Britain could live well on £800 a year, even minor company employees were making huge fortunes.  One merchant was given a profitable saltworks with 13,000 employees while another was given his own mint.  A certain Mr. Watts was awarded £117,000 for bravery at the battle of Plassey.  And Clive himself received £211,500 for installing one nawab and another £27,000 a year from another grant.  Such opportunities for making quick fortunes unleashed a flood of applicants back home for service in India, some applications being accompanied with bribes of up to £2000.  Newcomers from England were often shocked when first encountering their colleagues already in India, since they typically mixed freely with the natives and had adopted their customs, food, and clothing.  Service in India had its risks for the British, mainly tropical heat and diseases.  As one local proverb put it, “Two monsoons is the age of a man,” indicating that few Europeans survived conditions in India more than two years.  Bombay was known as “the burying ground of the British”.

However, while company employees who survived service in India were making their fortunes, the company’s loose management was costing it a fortune, forcing it to apply to the Bank of England for a loan in 1773 in order to avoid bankruptcy.  As a result, Parliament exercised increasing control over the company, establishing governors-general to oversee its activities.  This led to a succession of governors with different attitudes and policies.  While some governors, such as Warren Hastings (ruled 1778-88) were known for their tolerance of and willingness to learn about the native languages and cultures and to give Indians posts in their government.  However, other governors, such as Lord Cornwallis (1788-98), reversed many of these tolerant policies and dismissed most native Indians from higher posts in the administration. Getting into the nineteenth century, tensions grew between two factions: one advocating tolerance and respect for Indian culture and another claiming the superiority of European civilization over that of India.  This created a growing gap between the British and Indians that also fostered growing discontent.

Two other developments in the 1800s led to growing unrest among Indians.  One was the growing number of Christian missionaries coming to India to preach Christianity, which clashed with the more flexible beliefs of the Hindu majority and the strong beliefs of Indian Muslims.  Secondly, the British were bringing in modern technology (especially railroads) and business methods, which disrupted the traditional, slower paced culture and economy of India.

Things came to a head with the Great India Mutiny in 1857.  Sparking it was a misunderstanding about what kind of grease was used on the bullets for the sepoys’ new Enfield rifles.  Muslim troops thought pig grease, which they abhor, was being used, while Hindu troops thought the British were using grease from cows, which they hold sacred.  The resulting mutiny developed into a serious rebellion that the British finally managed to put down.  However, this was the final straw as far as the British government was concerned, assuming direct control over India in 1858 and eventually dissolving the British East Indies Company.  Just as one British queen, Elizabeth I had signed the charter forming the British East Indies Company some 260 years earlier, so another queen, Victoria, signed it into extinction.  Ironically, its career had started with a group of merchants in search of nothing more than “quiet trade.”  For the next ninety years, direct British rule would prevail in India.

Britain ruled about 60% of Indian directly and the other 40% indirectly through native princes who followed British policies.  During their time in India, the British developed tea and cotton agriculture and coal and iron industries.  In fact, by 1940, the Tata Iron Works was the world’s largest Iron factory.  Likewise, the British continued developing India’s infrastructure with more railroads and telegraph lines, so that by 1900 India had the longest railroad in Asia.  British administration and bureaucracy were efficient, as was the British style education system Britain established.

However, even these developments contained the seeds of problems for British rule.  As before, the new industries, railroads, and telegraphs, however progressive they may have seemed to the British, disrupted the traditional culture and economy of India.  By the same token, however efficient the bureaucracy was, there were large gaps between the higher ranking British and lower ranking Indians that carried over to society in general.  Increasingly, Indians were getting tired of their second-class status and worked increasingly for independence.

World War I (1914-18) and World War II (1939-45) further catalyzed India’s push for independence, since Britain had to rely heavily on Indian recruits to fill its ranks.  In return, Britain promised more political concessions, thus weakening its hold on India, encouraging more demand by Indians, and so on.

In 1920, a new leader, Mohandas Gandhi emerged as the voice of the Indian National Congress.  Educated in both traditional Indian culture and British schools, Gandhi developed very effective non-violent tactics of resistance while protesting British policies. The British, not wanting to risk the bad publicity a violent reaction could generate, had to give in to Gandhi time after time.  Therefore, at the end of World War II, Britain promised independence for India.  Unfortunately, this revived the issue of whether there would be one large Hindu-dominated state or a separate Muslim state in the North, leading to violent clashes between Hindus and Muslims broke out.  Finally, in 1947 Britain the region between Hindu India in the South and Muslim Pakistan in the Northwest that also controlled a separate territory, Bangla Desh, in the Northeast.  Despite heroic efforts to keep the peace by Gandhi  (who was killed by one of his Hindu followers in 1947), tensions between Hindus and Muslims have continued to the present day and still threaten the peace and stability of South Asia.