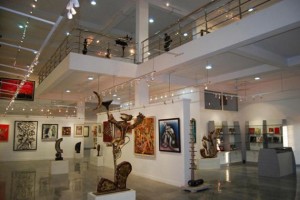 It is 1965, one year before Cholamandal will be born. A Chennai newspaper, predicting that it might well become the city’s Latin Quarter, hopes rather quaintly that the artists will contain their eccentricities here, away from the vulgar and offended gaze of philistines.

As it happens, Cholamandal’s artists have behaved impeccably, in art as in life. At the mellow age of 50, Cholamandal is no bohemian wilderness of mad creativity but a well-ordered and domestic space. It exudes a middle-aged air of contentment and comfort, and walking around, I encounter what is more bourgeois housing colony than riotous artist village. In their philosophy of art as well, the Madras School has notably rooted for line over abstraction, and survived controversial debates about art versus craft.

The artists in Cholamandal today recognise this, in a half-self-deprecatory, half-laughing way. But there is also the recognition that artists need not struggle in a garret to produce their best work; that a modicum of stability helps produce a sense of security that can be a huge source of comfort to those working in creative fields.

It was precisely a realisation of this that persuaded painter and visionary K.C.S. Paniker, who was then principal of the Government School of Arts and Crafts in Madras, to work towards a self-contained commune where artists would not be dependent on the vagaries of patronage or government grants but be free, financially and mentally, to pursue their muse. A sum of Rs. 40,000 was raised to buy 10 acres of land, and Paniker rounded up a bunch of artists and enthused them to buy plots. Thirty did (15 of the original group are there today), and the artists’ village was born.

We are standing at the reception counter of the museum, under the aristocratic gaze of Paniker’s portrait, leafing through a large album. It has newspaper cuttings and black and white pictures of the original bunch of pioneer artists, standing about in a barren land with bits of thatched spaces. There are grainy photographs of batik stoles and saris, and smiling tourists. That’s how the early settlers made money, by selling handicraft items to make up for the much less frequent sale of artwork. The artists recall designing matchbox covers for 60 paise each and saris for Rs. 90. In the 1950s and 1960s, paintings would not sell even for Rs. 100-150 each. The late artist Gopal’s wife remembers the family living off sales made during tourist season; “we sold nothing in summer,” she says. That first, hard decade, it was craft that sustained Cholamandal.

Sitting around in an informal circle, I listen as the artists take turns to relate stories of the early days. Says Senathipathi, “There was no electricity or roads. We would walk or take a jutka (horse cart) from Adyar Signal, where Grindlays Bank now is. Sometimes, we would hitch rides on sand lorries to get here.” Nandhan talks of how he moved into the village in 1979, paying Rs. 3 to rent a hut, till his sister paid Rs. 500 for the plot where he built his home. Gopinath recalls how artists would help fishermen haul their catch in and get some fish as reward. Across all their stories, the memory of Paniker spreads like a warm quilt, a man who appears to have conceived of the place with as much vision and passion as he would have a painting.

And it is an extraordinary place, owned and run entirely by the artists, with no government support. It does not seem to have a parallel in India or elsewhere. Kolkata’s Arts Acre aspires to it, while Kerala’s Kalagramam is government-run, as is Israel’s Elm Hod. MacDowell Colony in the U.S. is run by a private endowment. The 126-year-old Worpswede in Germany probably comes closest to the model, today a tourist town with some government-funded residencies. Otherwise, most artist colonies have transient populations, based on seasons and grants.

From that wobbly start, today the place is a sophisticated commune, with a guest house, smartly designed museum with souvenir shop, a new exhibition space, studio and quarters for artist residencies, and a small room where there are fortnightly film shows on art.

Walking around the museum, it is Nandhan’s superb stone Buddha that I first encounter. Later, in his cottage, he tells me how it was conceived. Long ago, when his studio was still a thatched shed, he was moulding a terracotta piece when he was called for tea. He hastily placed a lump of clay atop the piece and left. When he returned and stepped back inside, some trick of the setting sun threw the shape into the image he had been seeking. The lump was formalised, and the famous Nandhan Buddha was born. Vignettes like these linger — the sketchpads in Gopinath’s cupboard, each a vivid flip book of images; Nandhan’s front yard littered casually with granite coaxed to life, listening to Selvaraj talk about how his years of dance training morphed into the movement and imagery of his paintings, the eagerness in the voices of the new generation as they talk of carrying on the dream.

Paniker himself seems to have had no such ambition and said he would be pleased if Cholamandal survived one generation. It has survived three. In an early letter, the painter talks of living amiably amidst a family of artists “… so long as they don’t allow philistines to get into their midst”.

And have they managed? To keep the philistines away, I ask. Many original owners have sold off their plots to outsiders but, as Nandagopal says, “Thankfully, most of the newcomers have artistic sensibilities and don’t disturb the ethos.” It would be optimistic to imagine this will continue, or even that coming generations will carry Cholamandal on. Art, unfortunately, is too temperamental a muse to hitch a free ride on friendly genes, unlike the plots of land. The place is run by an association managed by the artists but there is no Trust in place, which could have ensured that some percentage of homes will always be on offer to deserving artists during their lifetime.

But those are future, messy decisions, well left to the inheritors of the vision. For the present, Cholamandal is still best evoked by Paniker, as written in a letter in 1971, “Perfect silence and peace. The ancient burial ground abuts on the sea. The waves almost lick the feet of the ones laid there to rest. Some day I will be laid there. I shall not be in bad company.”