8 Indian Traditional Drinks You Must Try! 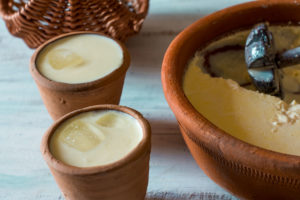 A lot has been talked about Indian food. Millions of food lovers all across the world would be pleasantly surprised to know the fact that there are as many varieties of Indian traditional drinks, as there are food and they taste equally good. We try to enlist a few of them here. So, the next time on your trip to India do not forget to try these popular local drinks and beverages in India.

This yogurt based traditional drink called Lassi has roots in the state of Punjab and another cool drink that keeps you refreshed in Indian summer. Yogurt is mixed with sugar, nuts, resins, pistachio and water to form a thick drink. It is often dressed with cream too. It travelled from Punjab and has now covered almost all of North India and somewhat inferior variety being available in the south as well.This popular Indian drink has been experimented with different froms from time to time, to give it a new twist. Mango lassi, strawberry, pineapple lassi are the popular versions. Lassi can be salted too with cumin powder, black pepper and rock-salt. Some people add cardamom powder and rose water to sweet lassi.

To prevent from sun-stroke and to beat the heat in summer, aam panha is the best bet. This refreshing summer drink is sour in taste. It is made from raw (unripe) mangoes, salt, cumin powder, green chilies and coriander & mint leaves.  It detoxifies your body and undoubtedly is the best way to quench thirst and one of the most widely consumed Indian drinks during the summers. It is known to maintain the body temperature.

This spicy Indian beverage can be easily prepared at home. ‘Jal’ means water and ‘Jeera’ is cumin. The beverage is salty lemonade, basically made of ground roasted cumin and it is an excellent appetizer. It is also the most popular as summer drink. Black pepper, salt and mint are mixed with the drink to elevate its taste.

This little known drink belongs to the Indian states of Chhattisgarh, Jharkhand and Assam and is a part of their tribal culture. This non-alcoholic beer like drink is made of rice, barley or millet. Fermentation of rice starch is done to make the beer. It is a rich source of microbes.

This sweet drink is immensely popular in the Indian state of Maharashtra. Kokum pulp (Garcinia indica) is boiled and mixed with cumin and sugar. The syrup extracted this way, is cooled and refrigerated. It tastes the best when served chilled. It improves the digestion and keeps the body cool during summer months.

This local drink of Goa is made of cashew apple or coconut and is classified as country liquor. This is widely served in all the bars, restaurants and shacks of Goa.

Masala Chai hits the chart. The most widely consumed Indian beverage is made by the black tea with a perfect mixture of herbs and Indian spices. This flavoured tea smells and tastes awesome. When black tea is brewed with Indian spices, it begins to taste wonderful. Tea is available in all the coffee and tea houses all across the country. Green cardamom, ground cloves, ground ginger, cinnamon and black pepper are mixed in tea. The popularity of masala tea has grown immensely and these days they are available in concentrates, tea bags and instant powdered mixture too.